This is a great story about how Simon was hired to perform and  was a very small part of the beginning of Patron tequila. 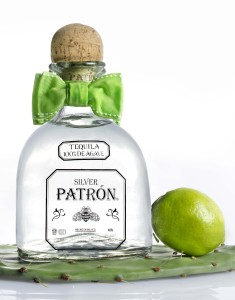 “The Taste Test”
It was either going to make us or kill us. Martin had decided to throw caution to the wind and publicly challenge the top-selling tequilas on the market to a blind taste test, hoping to build instant brand awareness among the consuming public. It was a risky move indeed. If Patrón failed to make the grade, it would be free and fabulous advertising for the other guy and would absolutely ruin us.

Wolfgang Puck, a friend of John Paul’s, gave us the ideal venue: Spago, the hot spot where all the movers and shakers at the time did lunch. Only this was more of a liquid lunch. The mere fact that we were doing a tequila-fueled event in the middle of the day on a Thursday was enough to generate extraordinary buzz. This was 1991, when the three-martini lunches of the roaring 1980s were a thing of the past and the idea of having such an elaborate event in the midst of economic hardship caused by the ongoing recession was unthinkable. That, plus the sheer ballsiness of what we were trying to prove, had everyone in Tinseltown talking.

My dear friend Dick Weaver, a former colleague from my PR days who now had his own boutique publicity firm, PR Works, was hired for the launch. He represented an interesting array of clients across a broad spectrum of industries and had a unique approach to public relations. Dick brought together a panel of distinguished judges, including his client Luis Barajas, founder and editor of Detour, the hippest magazine in Los Angeles at the time, as well as famed Hollywood columnist and socialite Joan Quinn. We also had several top food and beverage critics and restaurateurs, including the well-known Los Angeles tastemaker Steve Wallace, owner of the luxury retailer Wally’s, so our judges were highly respected and had serious clout. For added authenticity, we hired Ernst & Young to overlook and tally the results, just as they do at the Oscars.

And of course there were celebrities. Dick happened to be on the board of Earth Communications Office (ECO), the first environmental organization to raise awareness about global warming. He convinced Martin and JP that rather than try to get celebrities to the event one by one, they should make a sizable donation to ECO through Patrón. Following that advice, they gave $10,000 to the cause and encouraged ECO’s participation. ECO in turn invited its major players to attend, maximizing the PR benefit. It was one-stop shopping.

Among the luminaries on the A-list board were Tom Cruise, Mimi Rogers (the first Mrs. Tom Cruise), Arnold Schwarzenegger, Ed Begley Jr., Esai Morales, Sara Gilbert, and the Olympic gold medalist and AIDS activist Greg Louganis, some of whom attended the event. Other stars on the scene included James Coburn, a friend of JP’s, and Lara Flynn Boyle, Dick’s dear friend. It was to be more like a movie premiere than a product launch.

Every detail had to be perfect, because this was Patrón’s first extensively media-covered event. I had beautifully embossed invitations made in black with the Patrón colors, tied with green ribbon. We had our glassblowing factory in Mexico send us 150 custom-made half-size Patrón bottles as swag for our guests, but when they arrived from the factory the day before the event, they were covered in sawdust and needed to be washed, dressed with labels and ribbons, and filled with Patrón. Luckily, we had some free labor on hand in the form of my 11- and 13-year-old nephews, Gary and Mark, our chief bottle washers, working at night in our Marina del Rey home. Their nimble little fingers were just what we needed to affix the half-size labels, and they were thrilled to be involved.

No, we weren’t leaving minors unattended while they bottled 80 proof alcohol. Our girlfriend Deborah Herman was on hand to help and supervise. Leaving the three of them alone, we entertained our guests of honor, the family member owners managing the factory, as well as Francisco, our master tequila blender, whom we had flown in from Jalisco for the event. Apart from Francisco, they spoke little, if any, English, so we invited Simon Winthrop, a magician we’d met in Marina del Rey, to perform tricks and keep them amused at dinner. When Martin and I first saw Simon, we were entranced by his beautiful smiling face and spirit. We knew we had to use him to promote Patrón, and our guests’ reactions to him confirmed our instincts. They were thrilled. It was a successful dry run for the Spago lunch, as Simon was to be our featured performer at the event.

The next day, I was both excited and petrified. Everything was on the line. But the room, in Spago’s original Sunset Boulevard location, looked flawless. Wolfgang created a selection of hors d’oeuvres and an exquisite three-course lunch menu using Patrón as an ingredient in each item. Nothing like this had ever been done before. His amuses bouches and sorbets were almost as talked about as our giant leap of faith in Patrón itself. While the 100-plus guests mingled, sipped, and murmured in anticipation, Simon was on hand to perform tricks and wow them at their tables, charming everyone just as we expected he would.

While the judges huddled together on one side of the dining room, the party was raging on the other, which was packed with tastemakers and members of the press. Out of the corner of my eye I could see Martin pacing. He’d briefly lost his confidence and was sweating profusely. For a man so full of bravado, it was unusual to see him that nervous. But then, everything was at stake.

You wouldn’t know it to look at John Paul, who was perfectly calm.

Ernst & Young went upstairs to tally the scores and then came back down with a verdict. The suspense was unbearable. Although we knew no one could match us in taste, we’d put ourselves up against the most expensive and recognized brands at the time: Herradura, Sauza Commemorativo, and some of the Cuervo tequilas, among those I can recall. It was a small pool to choose from in those days. Of course Patrón was the most expensive of the competing brands and therefore the only one paying attention to packaging and presentation in addition to quality.

But we were still taking a tremendous risk, so to say I had butterflies would be an understatement. Finally, one of the auditors called everyone’s attention, and announced: “And the winner is. . . .”

Just at that moment, Simon the magician lit a cigarette, creating a poof of smoke from which a bottle of Patrón appeared. It was our big finale. (Of course, Simon had the other brands stashed nearby in case a different winner was announced.)

JP was right. We came out on top. The crowd roared in approval, and the press garnered over the next few days and weeks was phenomenal. The event put us on the map. Passing the blind test gave us the right to claim that we were the best-tasting tequila on the market. At five o’clock, the last of our lunch guests poured out of Spago and into the limos we’d hired to get them safely home. From then on, Patrón was on the lips of every hipster in Hollywood.

A star was born.